Today I... Get Real: The After-Bitch

Yesterday I posted a pretty self-deprivating article; half philosophy, half-whimsy. If truth be told, one of the multitude of reasons as to why I moved to Greece, was out of fear. As stated in the previous post, I am not entirely sure of what I want to be in the future, and that uncertainty is definitely scary. Of course, I have dreams. But they do seem pretty far-fetched. An exceptionally slim number of people get to live out their fantasy of being in a self-sufficient band, so as father time etches onto my soul, my passion for music becomes more desperate. Being a pretty average musician, my contributions to a band are mainly songwriting and performing. It is important to know your limitations. I am not the next Slash. My hat is nowhere near as cool as his.

On the topic of knowing your limitations, I believe it is important to control your doubts of the future. If you have an idea in mind, and it is realisable, then why not take the appropriate steps? Some of the most intelligent people that I have come to know, have left University with an invisible streak of debt just waiting to explode in their faces at some point. Even if they don't have to pay it off, it's definitely not a pleasant thing to have hanging over your head. In addition to this, it is becoming increasingly difficult to find a job in your area of study due to lack of experience. Volunteering is the most viable option. Businesses love that shid. Free work. Bang on. I am not saying it is a bad thing. More than likely, it will be the way I get onto the bottom rung of the career ladder. It's just a hard way to live and can be dehabilitating when you have spent a few years studying in your trade of choice, with hopes and that youthful glisten in your crystal blues, just to find that you can only find work where the initial valuation of your skill falls at zero. I often volunteer my creative editing services to my friends by helping them add a bit of depth and style to their CVs, proof-reading their University submissions etc. That's for friends, though. I hope I can find work thay pays me according to my skill level. At the beginning, I expect to be paid pittance compared to more experienced members of the industry, but I have a love for that feeling of taking money home. That feeling of appreciation and self-worth that comes from a job well done with an income well earned. If this feeling can come from a job that you are passionate about and truly enjoy that feeling must be on a completely different plataeu. That's what I strive for in the future. Fulfilment.


So don't take your time for granted. Seize the opportunity. I know that one of my friends wouldn't mind me speaking of his first stages of success because he knows I am immensely proud of him. He spent three years of grey misery at Sainsbury's, kicking cardboard boxes around a warehouse and bothering the products in the bread aisle. It was soul destroying for him. When in actuality he wanted to work in what he was passionate about and holds a great talent in; Web Development and Graphic Design. Now, after finally pulling his finger out, he has a challenging job in the field that he studied at University. This story is enough of an inspiration for me to step forth and not seize opportunities, but make them. Life isn't there to be taken advantage of. Not always. You need to create your advantage. It is too early in the day to pretend I know anything about tennis to make a witty tennis remark using the term 'advantage'. Just pretend I made a witty retort about Tim Henman making a triumphant return and winning the Superbowl.

As an after-thought, please don't see this text as some preachy pipe dream, because if you do then you truly do no have faith in yourself or others. It's obvious that you cannot be whatever you want to be. When your nursery teachers told you that, when you sat there with your middle finger in your nose - one knuckle deep in six year old treasure - s/he was lying to you. But don't just accept that tempting breadline to beerkend lifestyle. Don't listen to this modern pop music that sedates your ambitions by distracting you with direct orders to 'get crunk' and sex things up in clubs. Be realistic, but be aspirational. Be something more. Never want more. Just be more.

On a lighter note, here is a picture of my friend mowing my lawn last summer. Smashing bloke. 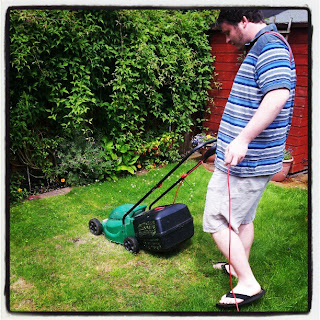 Email ThisBlogThis!Share to TwitterShare to FacebookShare to Pinterest
Labels: Get a Grip, Get a Job, Get a Life, Today I

Thank you for your time and interest - it is appreciated.